Delivery in 10-14 business days!
Inspired by Pamela Colman-Smith, the Melanated Classic Tarot is an inclusive alternative to the euro-centric

For over a hundred years, spiritualists of every race, creed or color have used the Rider Smith-Waite Tarot Deck exclusively. It is by far, the most widely used & influential tarot deck in the world. It's classic imagery is immediately recognizable, & has become the unofficial blueprint for nearly every other tarot deck in circulation today.

In the last decade, the spiritual community has seen a quiet renaissance, resulting in the formerly taboo practice of tarot becoming mainstream. Many of these "New-Age" truth seekers (myself included), are brown-skinned weirdos unfulfilled by the religion of tradition, seeking alternative methods to connect with their ancestors & the Most High.

New to the tarot scene, we quickly realized that for a spiritual science based on "reading" your story in pictures, images representing our likeness were absent.  The Melanated Classic Tarot Deck is the end result of our decision to colorize these images,
​because you can't see your story if you can't see yourself.

ships in 10-14 business days,
thank you for your patience. 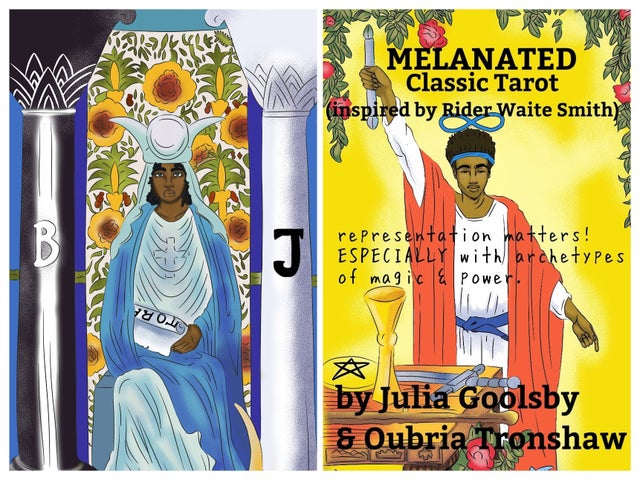 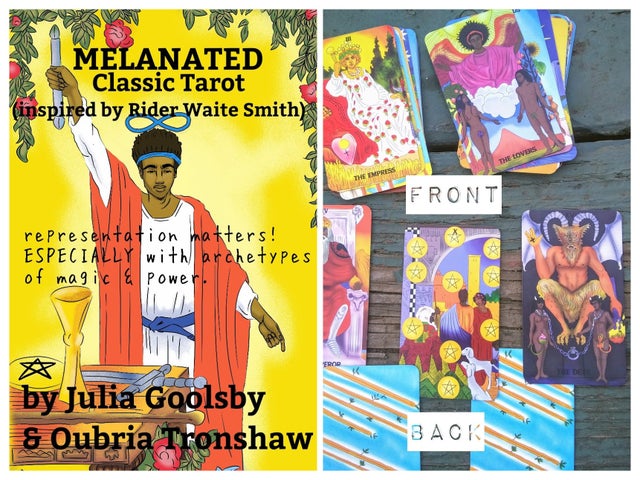 ​In the tarot, Leo season is represented with the Strength Card. Not only is the Sun in Leo for the next four weeks, the new Moon stars in Leo on Thursday, July 28th & will culminate in the full moon in Aquarius on  August 22nd. In the tarot, the Moon in Aquarius is the 7 of swords, the card that deals with self deception, hidden motives & secret thoughts. This energy will be disappointingly prevalent until (heyyyyy Ms.) Virgo season.

But- I learned from @bossybruja that moon cycles are actually six months instead of one month, from the new moon in a sign until the full moon in the same sign. Six months ago, in February, we had a new moon in Aquarius. The year had barely begun & we were in no mood to acknowledge (let alone confront) the pitter patter of half-truths & little white lies tiptoeing behind the scenes. But now that we sit channeling the sun of Leo season, everything is illuminated. Just as bear cubs grow into beasts, the invisible has grown obvious. What's understood doesn't need to be explained. Gone are the clouds of confusion with their perpetual shades of gray. For better or worse, light has conquered the darkness.

Although, we could be feeling some type of way about what we see, now that all is revealed. The facts to which we become privy could trigger a warning growl in our throat, warrant a flash of our very long teeth. But with Venus in Cancer (Two of Cups) until August 11th, the drama unfolds with those closest to us, within our very own pride. We're in the splash zone for whatever injuries we cause, so we'd best retract our claws, & remember that the peace we protect may be our own. This season, our guerrilla roar is silenced in deference to the deep gratitude of restraint. Said author Maureen Joyce Connolly: The greatest warriors know when to retreat.